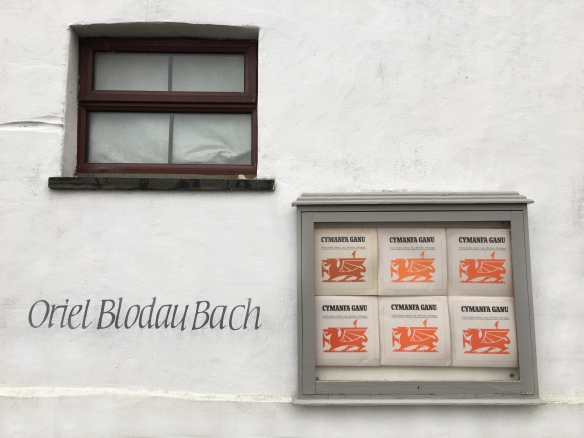 Sound and video artist, Jacob Whittaker is based in Cardigan, west Wales and has undertaken many projects which utilise his vast collection of vinyl records. As a founding member of the Gwrando sonic art collective he created the Capeli project with sound artist, Lou Laurens over a six year period. The project visited chapels throughout west Wales performing and recording sound and visual explorations and encounters.

The piece he has made for Oriel Blodau Bach makes reference to minister and musician Ieuan Gwyllt who set up the periodic music journal ‘Blodau Cerdd (Flowers of Music)’ in 1852 with three friends which gave instruction on hymns and hymn tunes.

Oriel Blodau Bach’s Second exhibition has been created for the space by Cardigan based visual and sound artist Jacob Whittaker. Whittaker has been working with sound as part of his practice since graduating from West Wales School of the Arts in 2003. A large part of his practice is centered around his vast collection of vinyl records, within which he has a particular interest in rare and unusual Welsh recordings such as those made by local groups or choirs.

Whittaker’s piece for Oriel Blodau Bach draws on this interest, presenting a collection of record covers relating to the work of the 19th century Calvinistic Methodist Minister and musician John Roberts or Ieuan Gwyllt (John the Wild). John Roberts was involved with teaching hymns and leading choirs and played an important role in Welsh cultural history.

Whittaker has also spent many years working with chapels in the west Wales area. As part of sound collective, Gwrando with artist and singer Lou Laurens he created sonic works within chapels. Part of that project involved exploring the decline of Chapels and the fight to keep hold of local traditions and communal spaces in the face of a modern world and an apathetic congregation.

The Cymanfa Ganu is also a traditional cultural practice in Wales that is under threat, while village schools and chapels close, our communities become ever more sparse and disparate. With no facilities in their villages people are forced to travel to towns or bigger villages to attend schools, shops, festivals and even pubs leaving these sparse traditions some of the very few things left to bring communities together.

Whittaker’s piece uses record covers from a recording of a 1969 Cymanfa Ganu to explore some of these ideas. The two thick rows of Welsh dragons adorning the gallery are almost a little shocking when they first hove in to view. The striking, repeated image evokes thoughts of nationalism and identity but really it is a piece about localism and community.

The viewer is asked to question where these ideas meet and who arbitrarily designates the lines between them. The small, local communities where we spend most of our time and which are our homes are being steadily eroded by the need to make things bigger, more connected and more universal. We are becoming a global community but is it at the cost of the physical places where people live out their lives?

The interplay of nationalism, localism and globalism are caught up for each of us with our sense of identity and that makes it a difficult subject to broach. These ideas come from the place where the impersonal and the personal touch and it is a difficult line to walk. I think Whittaker’s piece is thought provoking but not dogmatic; placing it here in the heart of a small Welsh village, the kind of place you might have driven through a hundred times but never stopped or noticed, is a way of making strong connections in unusual cultural spaces. It asks the viewer to stop and consider what is happening to the hearts of our villages, our communities and our culture and which loses are worthwhile sacrifices for a more connected, more global world and which of them are too high a toll.